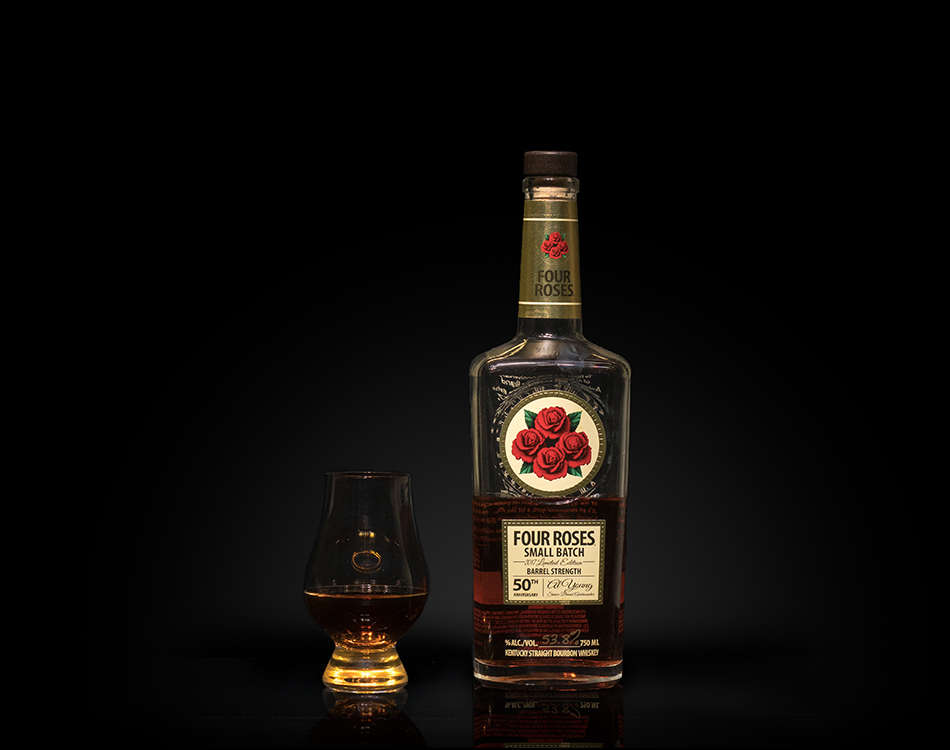 Four Roses has had a few different stories as to how the brand came to be; however, all stories concur that the whiskey has been around since at least the 1860s. The official account from Four Roses is that Paul L. Jones Jr. registered the Trademark in 1906 after moving to Louisville, KY from Atlanta, GA in the 1880s. There, he established the Paul Jones & Company distributorship, as well as a few distilleries. In 1928, the wholesale company purchased even more distilleries and brands, including the Frankfort Distillery and the Four Roses brand. Or had they already owned it?

The unofficial story is that Four Roses was created by Rufus M. Rose, who ran the R. M. Rose Distilling Company of Atlanta with his brother Origen Rose and their two sons: the Four Roses. The brand rights were then acquired by Paul Jones Sr. in 1888 according to a magazine. However, the R. M. Rose version of the story states that the Four Roses brand was sold to Joseph E. Seagram & Sons Company in 1913, which then sold it to the Frankfort Distillery - the same distillery that Paul Jones purchased in 1928. To add to the confusion, according to the Georgia State Historic Preservation Office, there is no provable link between Rufus M. Rose, the R. M. Rose Company, and Four Roses distillery.

According to the City of Atlanta, the Four Roses brand was registered as a trademark in 1906. In 1941, the Paul Jones Company sold the distillery and Four Roses brand to Joseph E. Seagram & Sons, which was not the original Seagram that the brand was allegedly sold to in 1913. After the purchase, Four Roses was still the top selling brand of bourbon until the 1950s, when Seagram decided to stop selling it in the United States and instead sell the bourbon in Europe and Asia. The brand then suffered in the United States, as Seagram used the Four Roses name on blended whiskey that was comprised mostly of vodka. It would be over forty years before the US would see true Four Roses bourbon again. Seagram was subsequently purchased by Vivendi in 2002, which shortly thereafter sold most of its brands to Diageo, the largest liquor company in the world. Diageo then put some of the Seagram brands up for sale, including Four Roses. Kirin, a Japanese brewing company, had already been the distributor for Four Roses in Asia and decided to buy the brand rather than losing it. First order of business? Ditch the blended whiskey and re-introduce Four Roses straight bourbon back to the United States. Today, Kirin still owns the Four Roses brand, and the distillery was left to make bourbon how it was originally made - using two distinct mash bills and five varieties of yeast, creating ten different types of bourbon whiskey. The bourbons are then blended together in various ways by the Master Distiller to create the different offerings of Four Roses bourbon.

“Al Young has served in a variety of roles at Four Roses for the past 50 years. In 1990, he became Distillery Manager and in 2007 was named Four Roses Brand Ambassador, a role that has him crossing the country sharing the story of Four Roses and its Bourbon. He is also historian for our storied 129-year-old Kentucky Bourbon brand, having researched archives, Distillery records, news accounts, photos and artifacts to write the book Four Roses: The Return of a Whiskey Legend, published in 2010. Al was inducted into the Whisky Magazine Hall of Fame in 2015 and is also a member of the Kentucky Distillers’ Association Kentucky Bourbon Hall of Fame.”